For many years people have been immersing themselves in various worlds shown in different movies and series. While we become deeply invested in the plot and the stories the characters tell, subsequently or not, we also pay attention to what they’re wearing. The film industry has always had a say in what’s trending and what isn’t when it comes to fashion. We’ve seen it in the past with shows like Sex in the City and Gossip girl, and now with the popularity of Netflix, more and more iconic looks are catching everyones attention.

With Netflix constantly bringing out new and better productions, we’ve compiled a short list of some of the shows that have managed to influence the fashion industry in recent times.

During the last year the pandemic forced most people and the fashion world to turn to comfortable loungewear. However, the release of the Netflix original series Bridgerton has caused the resurgence of elegant fashion trends from the early 1800’s. The show is based on Julia Quinn’s novels and follows the story of Daphne Bridgerton, a young woman who enters Regency London’s competitive marriage market and hopes to find true love.

Due to over 60 million people watching the show on Netflix, old European fashion trends from the Regency era, including corsets, have been making their way back into fashion trends. Since the show was released, not only has Victoria Secret been selling out their lingerie almost instantly, but searches for corsets, puffy sleeves and colorful gowns and dresses have skyrocketed.

Read More:   Eco-friendly clothing and accessories that are in fashion

Even though some of them might feel outdated, pieces like the corset or bustier can be brought back with a modern touch-up. People nowadays have been trying to incorporate them into their outfits by pairing them with jeans, skirts and blouses. 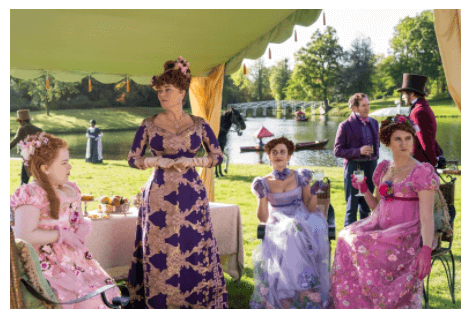 It wouldn’t be a list of Netflix shows inspiring fashion if we didn’t include Stranger Things, would it? The show brought back the retro looks from the eighties in full force and incorporated them into modern day fashion trends.

The show wisely plays with the nostalgic feeling that most people have for the 80’s. After the show became a hit many brands like H&M, Urban Outfitters and Forever 21 immediately incorporated retro looks into their collections. Whether it’s mom jeans, denim jackets, classic white sneakers, striped t-shirts or knee high socks, there’s something from the 80’s for everyone and we couldn’t be happier they’re all back in style! 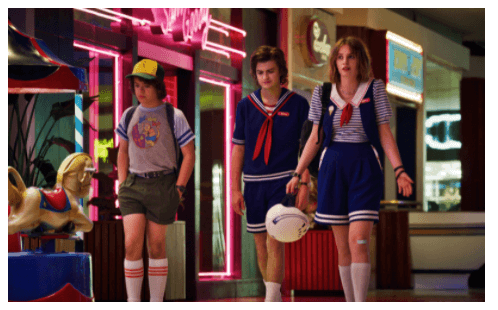 For most maybe a surprising addition, the french mystery thriller series Lupin also makes its way onto our list. The main character in the show is usually seen wearing a beret and a three-piece suit, however the detail that caught everyone’s eye were his shoes – the Nike Air Jordan 1’s. In later episodes the actor wears the Jordan Mid 1 “Yellow Toe” model.

You might be wondering what this has to do with anything. People wear Nike’s in plenty of movies, right? Although that might be true, the influence Lupin had on Nike’s sales was massive. After the show was released, Nike reported a 460% increase in their searches and click-throughs for the “Yellow-toe” model. 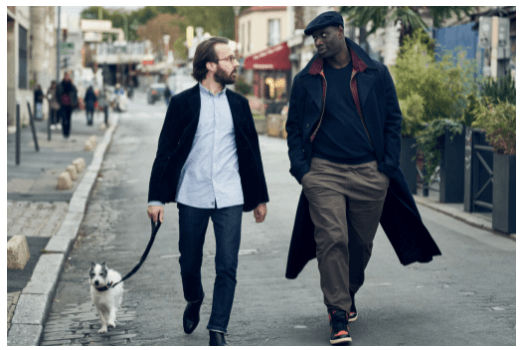 The Queen’s Gambit has without a doubt been one of Netflix’s most successful additions in recent years. The show was number one for numerous weeks and for good reason. Apart from the intriguing plot and the standout acting performances, the show also reminded viewers of some stunning vintage fashion styles.

Days after the show premiered, Google searches for checkered coats, white wool coats and turtleneck sweaters all skyrocketed. Apart from those the show featured countless classic looks from the past that can be incorporated in your outfits today like wool mini dresses, retro print shirts, cross-body bags, checkered one-piece swimsuits and more!

Apart from influencing fashion, board game shops around the world noted a significant increase in the amount of chess boards they sold after the release of the show on Netflix.

Fashion trends keep changing and more often than not, at a pace that is hard to keep up with. What we love about movies and series is not only that we can use them as inspiration, but the fact that they can take us back to different times and bring back trends and outfits that were deeply missed!